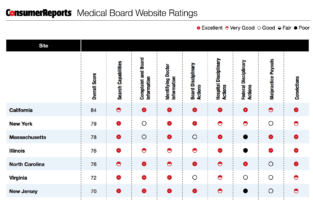 A Survey and Ranking of State Medical and Osteopathic Board Websites in 2015, released March 29, 2016, was a joint project of Consumers Union and the Informed Patient Institute. The report’s authors also published their findings in a Consumer Reports magazine cover story entitled, “What You Don’t Know About Your Doctor Could Hurt You.”

Overall, say the authors, who used 61 criteria to produce their ratings, most sites were difficult to navigate, and all sites can be improved to provide the public with easier access to important information about their doctors, especially relating to their history of complaints and discipline.

Other highlights of the rankings: